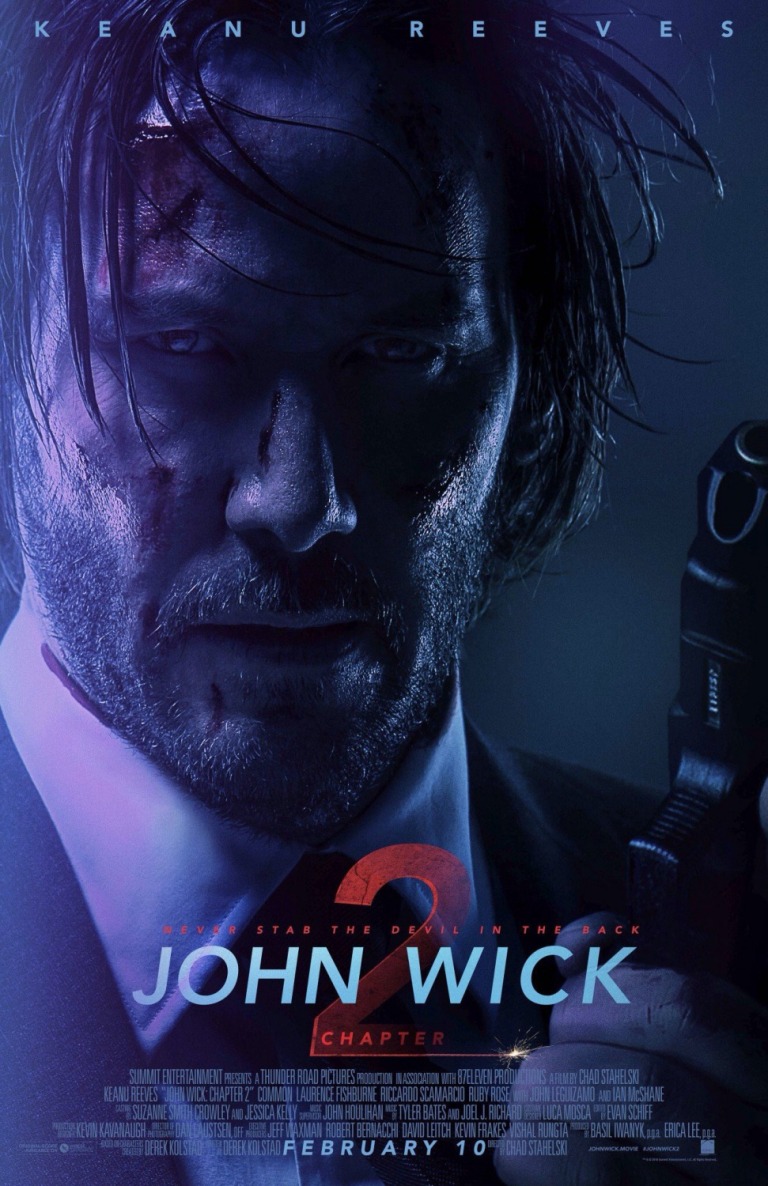 The Boogeyman is back in John Wick: Chapter 2! Is the sequel an improvement on the first film or just more of the same?

The answer is: more of the same. That doesn’t mean that Chapter 2 is another unnecessary sequel, though. Shortly after his vengeful rampage from the last film, John Wick (Keanu Reeves) returns home to be greeted by crime boss Santino D’Antonio (Riccardo Scmarcio). John owes D’Antonio a debt and the marker is being called in. D’Antonio wants John to kill his rival, Gianna (Claudia Gerini), so that he can ascend to the “High Table” of the criminal underworld. Oh, did I mention that Gianna is also D’Antonio’s sister? By the arcane laws of the secret assassin’s/criminal world – which seems to be growing exponentially by the second – John has no choice and must comply. However, Gianna is a newly anointed kingpin (queenpin?) and killing her will unleash all kinds of hell on John if he goes through with it. Will he survive the experience?

Like the original, Chapter 2 is immensely entertaining – as long as you can stomach excessive violence and carefully choreographed gun fights. It is also immensely stupid. John Wick’s world is essentially a video game dialed to eleven. Unfortunately, that brings with it a movie world that seriously stretches the suspension of disbelief. Literally, it’s like everyone in the world is an assassin. It felt a lot like the TV show The Following, where seemingly every person was in the “secret” cult, no matter how unbelievable. So, there are some elements here that are eye-rollingly bad. However, I had a ton of fun watching this film. The action is supremely choreographed, but because of its video game likeness, it feels a little soulless as John just blows dudes away with little to no problem. (Speaking of which, why isn’t there a John Wick video game?) All that being said, this really did feel like another chapter in John Wick’s story, which is what a good sequel should be.

Reeves is good as Wick, but I gotta say, some of his line deliveries had me wincing. Regardless, he does the role justice. Ian McShane and Lance Reddick are back from the first film and are great when they’re on screen. Common was fine as an opposing assassin, but I wanted a real rival for John Wick and we never get that from any of these characters. Ruby Rose was also fine as D’Antonio’s bodyguard, but for someone who was mute, she sure made a lot of noise when she fought Wick. Of course, the best appearance award goes to Laurence Fishburne, who shows up as another crime lord that John Wick goes to for help late in the film.It was just really great to see Neo and Morpheus on screen together again.

Overall, if you liked the first John Wick, you’ll definitely like Chapter 2. It doesn’t do too much differently, but what it does do, it does well. A lot of the story elements are pretty dumb, but you’ll be having so much fun, you’ll be able to overlook those.