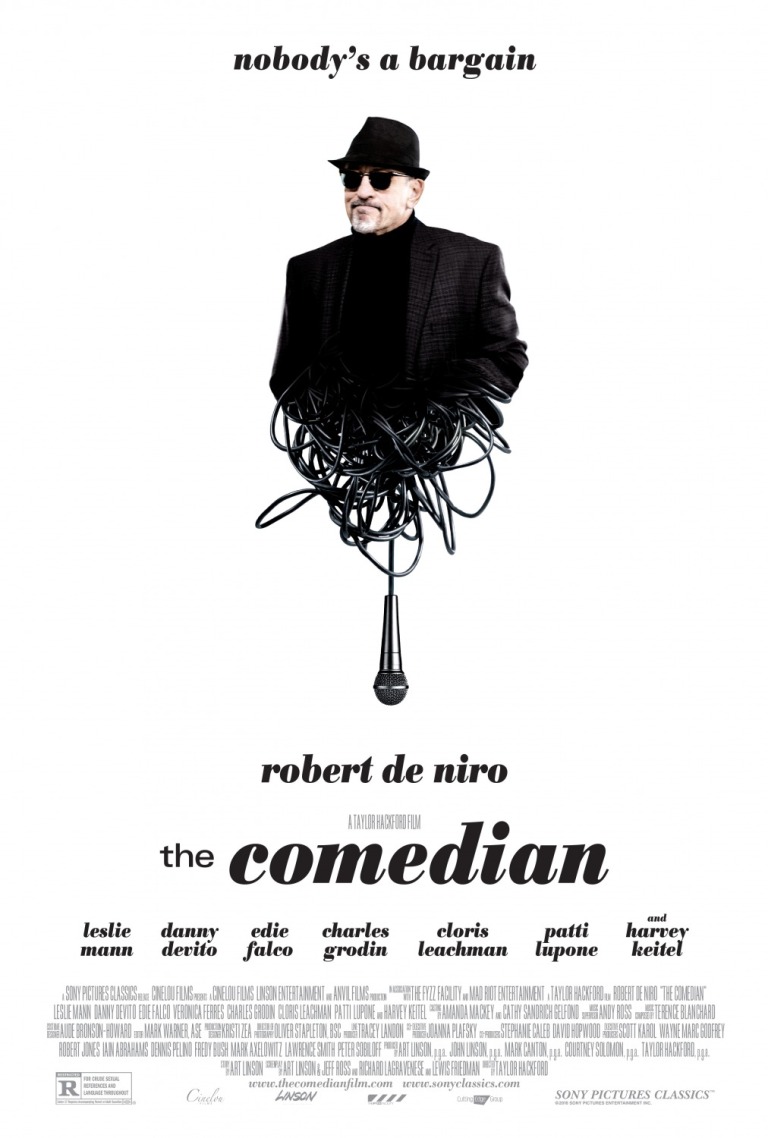 Does Director Taylor Hackford‘s latest, The Comedian, make you want to laugh or hang yourself?

Robert De Niro plays Jackie Burke, an aging insult comic who once had fame on a safe sitcom. When he catches a jerk (Happy Anderson) filming one of his sets at a comedy club, Jackie attacks the guy and gets a month in prison for his trouble. His agent, Miller (Edie Falco), tries to get him some work, but he can’t leave the state for a little while due to his probation. He does his community service at a soup kitchen where he meets Harmony (Leslie Mann), a woman that is trying to get her life together and out from under her over-protective father (Harvey Keitel). Meanwhile, Jackie is trying to shore up relations with his brother, Jimmy (Danny DeVito), and Jimmy’s wife, Flo (Patti LuPone). Can Jackie stage the comeback he’s looking for and can he ever escape his sitcom past?

The Comedian features an amazing cast – several famous comics appear throughout as themselves – and is very funny in parts, but what it doesn’t feature is a great story. When Jackie is attempting to jumpstart his career or interacts with his family, the movie shines, but whenever the story shifts to his relationship with Harmony and her father, the film loses steam. Mann and De Niro have a nice chemistry and banter, but I never bought them as a romantic pair. The problem is, that part of their relationship is the focus for the majority of the third act and the film’s four(!) screenwriters can’t really make it work. It’s a slice of this insult comic’s life, but films like that can go either way and this one is mostly weak. It also doesn’t help that Mann is not much more than a plot device here, seemingly in the film just to set up the final punchline. That punchline is certainly funny, but Leslie Mann deserves better than that. The film also doesn’t spend enough time with what does work: Jackie’s family – DeVito is criminally underused here – and his dealing with how showbiz has changed. De Niro is good in the role and has some nice one-liners here and there, but I almost wanted him to get Don Rickles nasty. It would have given the film a little more edge.

Overall, catch The Comedian on cable when it surfaces, but definitely don’t run out and see it in the theater. I didn’t find it to be as bad as some critics are making it out to be, but I find a parody song called “Making Poopy” to be pretty funny.