Depeche Mode’s 1997 classic Ultra turns 20 today and Doug penned this essay to celebrate the occasion on his website. Read on!

Ultra, easily Depeche Mode’s most underrated album, turns 20-years-old today. For my take on the album itself, you can read my review here, but on this milestone anniversary, I wanted to share the memory of first obtaining the album on release day—which was technically April 15th here in the States—and then listening to it for the first time.

The memory begins on the day before Ultra was released in America. My friends and I were walking around New Brunswick, just off campus at Rutgers University in New Jersey. We stopped in an indie record store. I was hoping that I might be able to score the album a day early, because A) I was an obsessive Depeche Mode fan and B) I hoped the indie store would be a little lax on the on sale date policy. Then wonder of wonders, I found the album, but the front cover had a gold foil stamp on it that said it was a promo copy and not for resale.

Fuck it, I thought, I’m buying this shit right here.

So, I bought it and greatly anticipated my first listen. Then my buddy had to go and fuck it all up for me by saying, “You know, the band won’t see one dime of that money.” (I think he was interning with a record label at the time, so he knew the ins and outs of “The Biz.”)

I struggled with my desire to hear the album and my conscience. Yes, Depeche Mode wouldn’t be hurt in the least by not receiving my money for the album, but call me crazy, I think artists should be rewarded for their work (by the way, feel free to buy my book if you’re so inclined). So, against every instinct I had, I returned the album, saying something like, “I don’t want to buy a promo,” or something equally stupid. In my defense, the stamp really did ruin the cover.

Though I felt like I’d done the right thing, I was still pretty pissed. That feeling would only get worse the next day.

The following morning, I headed down to Sam Goody, or for those who remember them, Sam Greedy was probably more appropriate—and headed over to the Depeche Mode rack. One (major) problem: Ultra wasn’t there. I asked the clerk just what the fuck was going on—okay, I didn’t really say that—and was told that the delivery truck was late. Gah! The clerk took my number and promised to hold a copy for me when—or if—the truck arrived later that day.

With my free time dwindling, I headed off to class and sat restlessly through the lecture, all while devising different ways to punish my friend for denying me the opportunity to listen to the new Depeche Mode album.

After what felt like forever, I headed back to my dorm room and found a message on my answering machine—Ultra had arrived. Now, while I ran a bit of track in high school—early in high school—and played in a town soccer league until I left for college, I wasn’t the most athletic guy at Rutgers. So, when I tell you that I ran all the way down to Sam Goody, which was several blocks from my dorm, you’ll know that I ran.

I burst into the store and breathlessly asked the clerk for my copy of the album. Finally, I had Ultra in my hands—again. I threw my money at the clerk and then, despite my lungs being on fire, ran all the way back to the dorm. Once I got back—and resisted the urge to throw up—I loaded the album into my roommate’s stereo system and let Depeche Mode take me on a trip. Wait, that’s the wrong album.

I skipped the first track, “Barrel of a Gun,” because it had also been the first single and I had already played it to death. I was more interested in the second single, “It’s No Good,” the fourth track on the album. I had only been able to hear it once on the radio and I’d been dying to hear it again ever since. After listening to the song that would later become ensconced in my personal Depeche Mode Top 5, I decided to sit down and listen to the album in full, but still skipping “Barrel of a Gun.”

As soon as the opening chords of “The Love Thieves” sounded, I was transported and completely sold on Ultra, no matter what I heard after that. While “It’s No Good” sounded like classic Depeche Mode and “Barrel of a Gun” was the typically jarring first single that the band liked to hit fans with since “Personal Jesus,” “The Love Thieves” sounded like nothing Depeche Mode had ever done before. It was beautiful and a track that I never thought they’d be able to accomplish since musical architect Alan Wilder had recently left the band. Songwriter Martin Gore’s lyrics and guitar were gorgeous and Dave Gahan’s voice sounded better than ever, which was quite a feat after his very public battle with heroin addiction. He was healthy now and sounded like it. “The Love Thieves” may not be everyone’s favorite, but that song combined with “It’s No Good” made me fall in love with Depeche Mode all over again.

Then I heard “Home.” Holy shit, what an amazing song. Gore handles the vocals on this one and still to this day, it’s the best song on which he’s ever sung. The heartfelt lyrics combined with the driving beat and strings made for an incredible combination.

I liked “Useless” right out of the gate, even though it was a rockier song than Depeche Mode had ever attempted. Like all of the songs on Ultra, the lyrics are just great. While in some parts, the music isn’t up to snuff with what the band accomplished with Alan Wilder, the songs themselves are topnotch and some of the best Martin Gore has written.

Though I love it now, “Sister of Night” wasn’t one of my favorites when I first heard it. I think it’s the harsh opening, something that the band would repeat going forward with songs like “A Pain That I’m Used To.” “Freestate” was absolutely transporting and ethereal, the guitar on it reminding me a bit of New Order. I didn’t learn to appreciate “The Bottom Line” until much later, but now it stands with “Home” as one of the best Martin-sung songs in the band’s canon. The album’s closer, the light and airy “Insight,” was a bit disarming at first, but like with “Sister of Night,” I’ve come to love it. This beautiful track is one that I feel certain is about Wilder and his departure from Depeche Mode. It comes through especially in the lyrics:

And the spirit of love

Is rising within me

Talking to you now

I’m talking to you now

Whatever you do now

When it was first released, Ultra faced a lot of criticism from Depeche Mode fans. Some couldn’t accept the band minus Wilder—and he definitely gave Gore’s songs a life they never would have had without him—while others were taken aback by such a mid-tempo affair. Not me, though. I loved Ultra from the get-go and still do to this day. It sits in my personal ranking at number three, just behind Violator and Black Celebration, and it may even have been the inspiration behind the name of a character I hope my readers will get to know a lot better later this year. It’s a very mature Depeche Mode album and I think that even with Wilder’s departure, it still has his fingerprints all over it, probably due to longtime Depeche Mode fan Tim Simenon handling the production and the fact that the band had worked with Wilder for twelve years—something had to rub off. Despite the darkness that pervades the album, Ultra has a lot of great memories for me. And as any Depeche Mode fan worth his or her salt knows, Depeche Mode’s best music comes from the darkness. 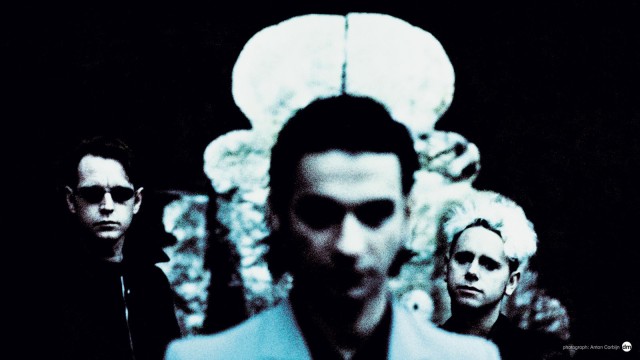 Buy the album on iTunes

This essay originally appeared on www.jdouglassimpson.com. See it here!