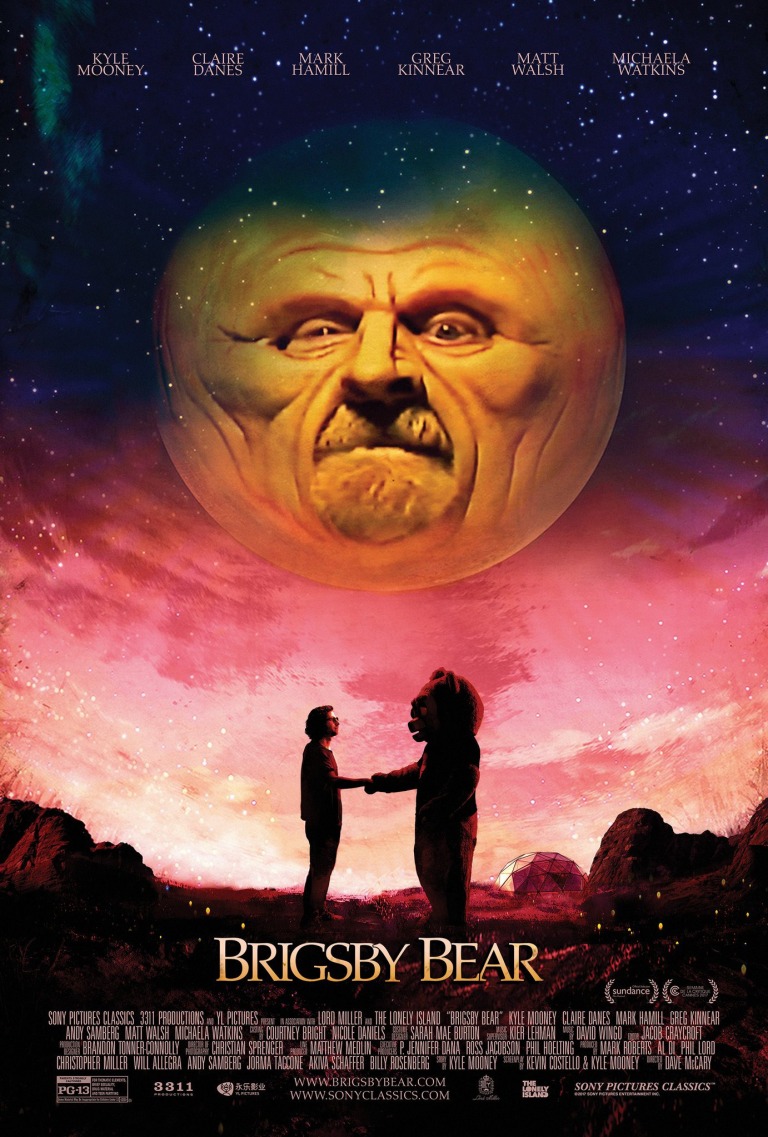 The brainchild of Saturday Night Live’s Kyle Mooney, Brigsby Bear is a strange comedy with a great cast and a unique concept. Is it any good or just weird?

James (Mooney) lives with his parents, Ted (Mark Hamill) and April (Jane Adams) in an underground bunker out in the desert. James stays in the bunker all day and has done so since he was a child. The reason being, the air outside is toxic. James’ entertainment and education all come from a single show, Brigsby Bear Adventures, which is delivered to the bunker as VHS cassettes. James’ entire life revolves around Brigsby, much like many a nerd have devoted their lives to Star Wars, Star Trek, and the like. Everything changes when the police storm the bunker and usher James out. He meets Detective Vogel (Greg Kinnear), who reveals that Ted and April are not James’ parents and that April kidnapped James from the hospital as an infant. He meets his real parents (Matt Walsh and Michaela Watkins), as well as his younger sister, Aubrey (Ryan Simpkins). James has trouble accepting his new reality, but the biggest thing that upsets him is that he’ll never get to see how Brigsby Bear Adventures ends. When Aubrey’s friend Spencer (Jorge Lendeborg Jr.) takes a shine to James, he uploads some of James’ Brigsby videos online, where they become a viral hit. James is then imbued with purpose as he determines to finish the Brigsby Bear story himself by making his own movie with Spencer’s help. Will James succeed in his quest or will he remain isolated in his own little world forever?

Brigsby Bear is a very funny movie. There is a lot of sharp humor here, especially as you watch James attempt to adapt to the outside world for the first time in his life. He is very socially awkward and that generates a lot of laughs. However, the film is also very sweet and heartwarming for these same reasons. James is an innocent plunged into a world that doesn’t make sense to him and his struggles as well as his unbridled optimism are touching. The film also has a great message about following your dreams. Many films have this message, but Brigsby Bear keeps James’ dreams very grounded and attainable. It doesn’t make those dreams any less important to James, but it shows that if you work toward something, you can make it happen, which is a nice message. I do feel that the filmmakers missed an opportunity to mine more drama from James’ situation, though. The quirky tone of the piece always seemed to win out over the possibility to really get to the heart of James’ struggle to separate from his former life. This didn’t ruin the film for me, though, I just felt that a bit more seriousness might have pushed Brigsby Bear over the top.

The whole cast does a great job here. Mooney proves to be a leading man the audience can root for. He’s a funny guy and his sweet portrayal of James is compelling. Hamill is great as always as Ted. He even gets to put his years of voiceover work to good use—listen closely to Brigsby’s voice. I also really liked Kinnear as the detective trying to help James get his life back on track, but not letting him give up on what he loves. Walsh and Watkins are good and funny as they try to understand the son they never got to meet until now. I also really enjoyed Lendeborg’s performance as Spencer. In films like this, you expect to find characters that will take advantage of James’ naiveté, but Spencer isn’t that guy. He genuinely wants to be James’ friend. I also liked Alexa Demie as Meredith, another of Aubrey’s friends. She has some hilariously awkward scenes with Mooney. Simpkins is fine as Aubrey, and I definitely liked her better than I did in The House, but I didn’t totally connect with her. Claire Danes has some funny scenes as James’ therapist, but as a therapist, she’s terrible, so her character didn’t completely work for me.

Overall, Brigsby Bear is definitely a strange film, but it is funny and heartwarming. It will definitely make you believe that dreams are worth pursuing and you may be surprised at how good Kyle Mooney is as a performer, since he doesn’t seem to get a ton of screen time on SNL. Check it out.