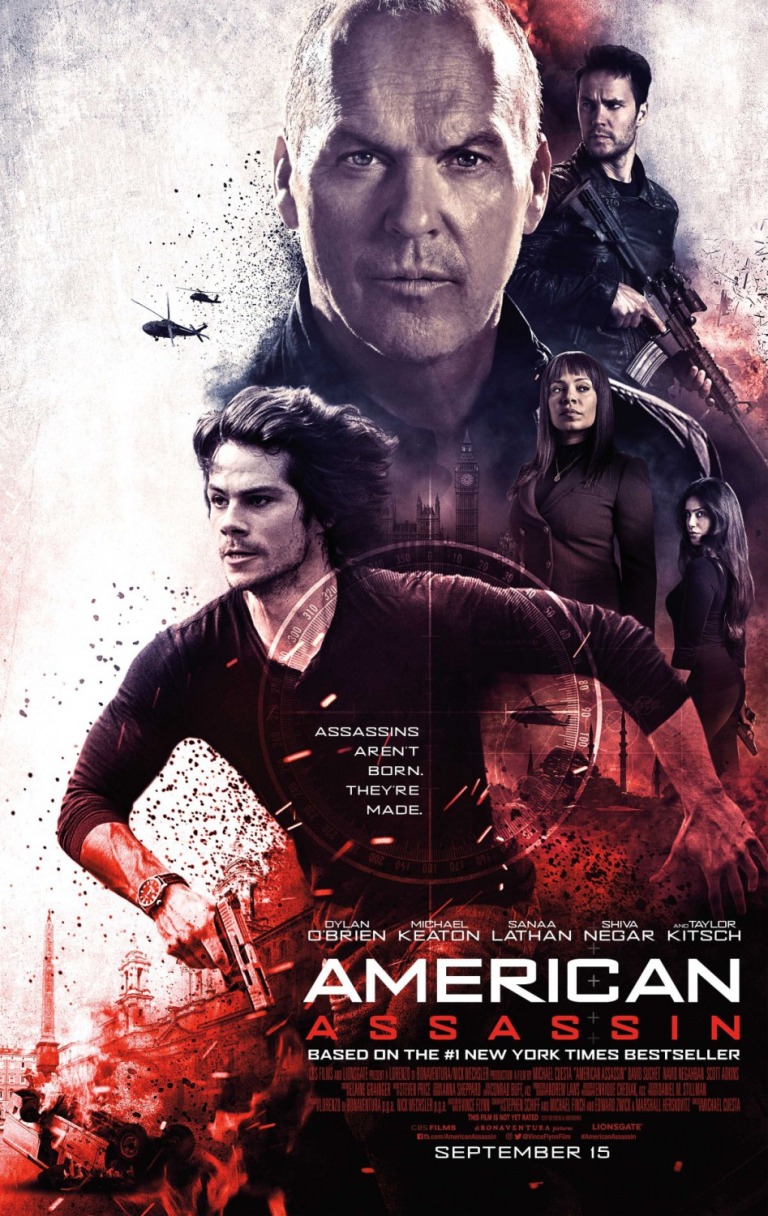 When I saw the first trailer for American Assassin, the first film based on author Vince Flynn’s Mitch Rapp character, I had hopes that this would be a different kind of spy film—the making of an assassin. Then, the second trailer looked like the film would be a schlocky piece of crap. Which one was the better barometer?

Mitch Rapp (Dylan O’Brien) is on vacation with his girlfriend, Katrina (Charlotte Vega). Mitch plans to propose to her on the beach. Terrorists attack, leaving dozens dead, including Katrina. Eighteen months later, Mitch has, essentially, turned himself into Batman as he hunts down the terrorist responsible for Katrina’s death. Mitch has also attracted the attention of CIA agent Irene Kennedy (Sanaa Lathan), who recruits him into a program that trains assassins. The program is headed up by Stan Hurley (Michael Keaton). Mitch joins the program and Hurley screws around with his mind, trying to show him that revenge is not a good motivator for what they do. Some plutonium goes missing and Hurley’s team gets called into action. Mitch is paired with Annika (Shiva Negar), an Iranian CIA agent. It is soon revealed that a former CIA agent, codenamed Ghost (Taylor Kitsch), is involved with acquiring the plutonium. Ghost was Hurley’s best student prior to Mitch. The race is on to stop Ghost from completing his homemade nuke. Will Mitch and Hurley stop him, or will this film have an unhappy ending?

Wow, was the second trailer right. American Assassin, which boasts four screenwriters, is so full of spy movie clichés, I was practically reciting the dialogue before it was said. The film is completely predictable. Mitch as a character is wholly uninteresting. He is way too perfect to be a compelling character. In Christopher Nolan’s grounded—read: more plausible—Batman films, it took Bruce Wayne seven years to become Batman. Not Mitch Rapp. He not only becomes a lethal killing machine in eighteen months, he also tracks down his quarry and is essentially a finished product when the CIA picks him up. He should have failed in his attempt to find the terrorists and had the CIA mold him into an assassin. The filmmakers tried to make Mitch more self-motivated, but they made him too perfect. Even when he makes mistakes in this film, everything works out for him. He’s a wish-fulfillment character of the highest order. What did he do before embarking on his mission? Where did all his money come from? The film would have been far more interesting if they’d showed how Mitch turned himself into an assassin, but the film skips all that. Hurley doesn’t really teach Mitch much more than some spy craft, but like I said, even when Mitch screws up, he succeeds. It makes the whole thing boring. Also, the whole homemade nuke plot is unbelievable. It gets dumber and dumber as the film plods along. There are some good action sequences, though, but not enough to save the film.

Michael Keaton is really the only reason to see this film. He continues delivering great performances and Stan Hurley is no different. There’s a point in the film where audiences even get a glimpse of an R-rated Beetlejuice when Keaton is being questioned under duress. It was great to see. O’Brien does his best as Mitch, and I like him as an actor, but the filmmakers give the character absolutely zero personality. He’s just so dull. Kitsch is fine as Ghost, but he quickly devolves into a typical spy/action thriller villain. At one point, he’s fighting Mitch with a knife, but punching him while holding the knife in his hand. Why isn’t he stabbing him? Oh, because the script said Mitch had to live for later. Got it. It’s all so lame.

American Assassin was a huge disappointment. I was hoping for a film that showed the shaping of an assassin, something that would have been interesting. Unfortunately, the filmmakers make Mitch so perfect and boring, he has no real character to speak of. The cool character here is Keaton’s Hurley. The film should have been about him.