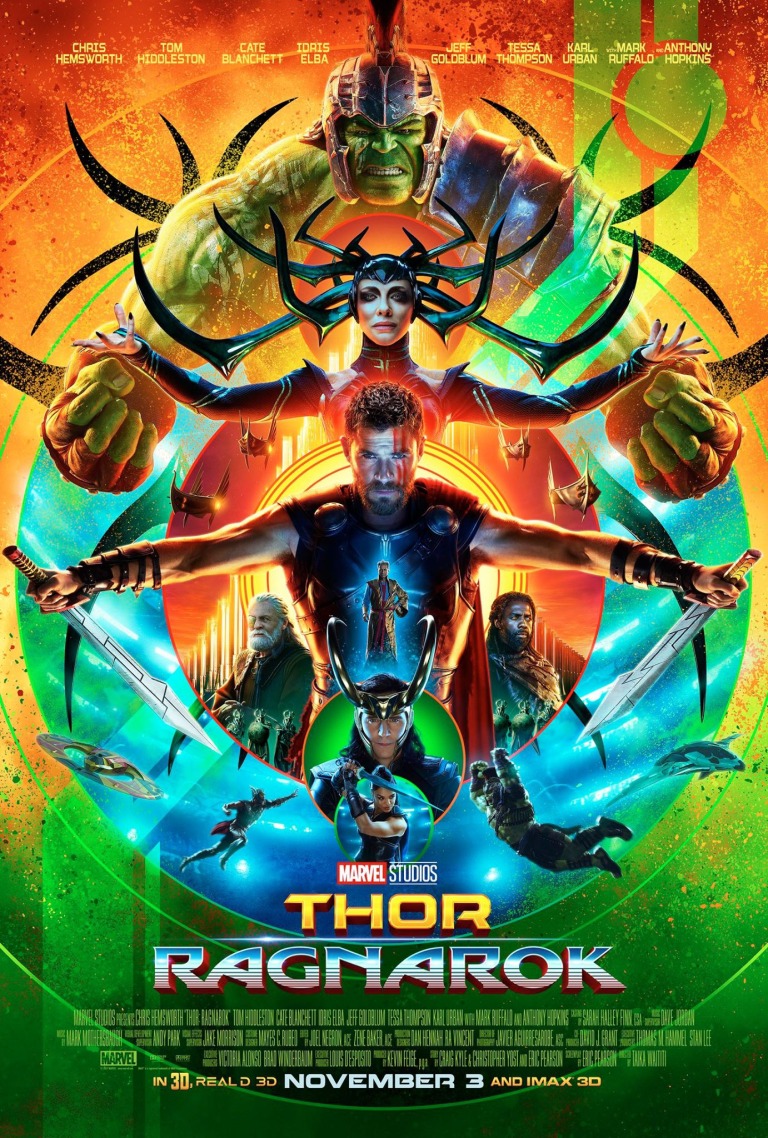 Despite what Marvel’s producers may have you believe, there is most certainly a hierarchy to the Avengers roster. At the top, there are Captain America and Iron Man—number one and number two really depend on who has a movie out at the moment—and way below them is Thor. Now, that’s not entirely the character’s fault. His films have been sub-par with inconsistent writing throughout. Is the third time the charm with Thor: Ragnarok?

Directed by Taika Waititi, Ragnarok focuses on Thor (Chris Hemsworth) as he works to free Asgard from the villainous Hela (Cate Blanchett). Along the way, he gets imprisoned on a gladiatorial planet called Sakaar by the Grandmaster (Jeff Goldblum). On Sakaar, the reigning champion is none other than the Incredible Hulk (Mark Ruffalo). In addition to Hulk, Thor hopes to win over Valkyrie (Tessa Thompson) to help with his Hela problem on Asgard. First, though, he has to escape Sakaar. Will Thor save his homeworld or will he just move to Earth and chill at the Avengers’ headquarters?

With Thor: Ragnarok, Taika Waititi has found Thor’s sense of humor. It’s always been there, because Hemsworth is a funny and charming fellow, but this Thor movie is an out and out comedy. The only problem is, with a title like Ragnarok—basically a Norse apocalypse myth—this probably should have been the most serious of them all. The film feels like two different movies smushed together. Both are good, but the more you think about it, the plots don’t entirely fit together properly. Thor meets Hela, who is keen on taking over Asgard, he gets—conveniently—waylaid on the planet Hulk has been stranded on for two years, and then returns to fight Hela. Although Hela has been busy scouring Asgard for Heimdall (Idris Elba) and his sword that can open the bifrost—Rainbow Bridge—it almost feels like she’s just sitting around waiting for Thor to get back and fight her while he has his buddy movie with Hulk. The two plots are entirely disconnected from each other, which makes the tonal shifts a bit odd when switching between Sakaar and Asgard. Also, while it was nice to see a female villain for once, Hela is far from the epic nemesis she should be. Don’t get me wrong, Blanchett does a fantastic job with the role, but like most Marvel movie villains, her character is woefully underwritten.

With all that being said, Ragnarok is still a wildly entertaining film. The script brings it down a bit—there are a few character deaths that I felt were rather cheap, but I won’t spoil them here—but in the end, it’s a hell of a lot of fun. The score by Mark Mothersbaugh is great and very 80s and Led Zeppelin’s “Immigrant Song,” which featured in the trailer, is used to amazing effect. Naturally, with Waititi at the helm, the film is hilarious throughout. He’s a very talented comedian and if you haven’t seen his other films, definitely seek them out.

The cast is an embarrassment of riches. Hemsworth, who has made Thor his own over the years, is a great lead and clearly having more fun than he ever has on one of these Marvel films. He really commands the screen and takes charge as Thor. Tom Hiddleston is back as Loki and has some great scenes with Hemsworth as well as a nice little arc for the character. Ruffalo is amazing as Hulk—for my money, he steals the show. With this rendition of the Hulk, it feels like there’s an actual character there. The Hulk has been in the driver’s seat of Bruce Banner’s psyche for the last two years and in that time, the Hulk as actually developed and evolved. He comes across as a toddler mentally and some of his interactions with the other characters are just adorable. He also has a nice emotional moment late in the film, which was touching. As I said above, Blanchett is great as Hela, but the character—as is the case with most Marvel villains—is not written well enough. Tessa Thompson is excellent as Valkyrie, a fallen Asgardian warrior that enters Thor’s orbit. She’s a nice foil for Thor. Goldblum is his zany best as the Grandmaster and I would have loved to have seen even more of him. It would have been great if he were the sole villain here, but alas, it wasn’t meant to be. Karl Urban puts in a nice performance as Scourge, Hela’s lackey, and Elba actually has something to do in this film as Heimdall, which is a nice change of pace. And, I’d be remiss if I didn’t praise Waititi’s acting skills as well as the character Korg. He’s a great addition to the cast and practically every line out of his mouth is funny. There is a cameo by Benedict Cumberbatch as Doctor Strange—not really a spoiler, as this showed up in one of the Doctor Strange post-credits scenes—which is a humorous scene, but it felt tacked on

Overall, Thor: Ragnarok is a blast. The story could have been a bit better—in fact, Marvel really could have split these two stories into two great Thor films, but the clock is ticking toward Infinity War, y’know—but it’s a fun movie with characters that audiences will love. Definitely check it out.