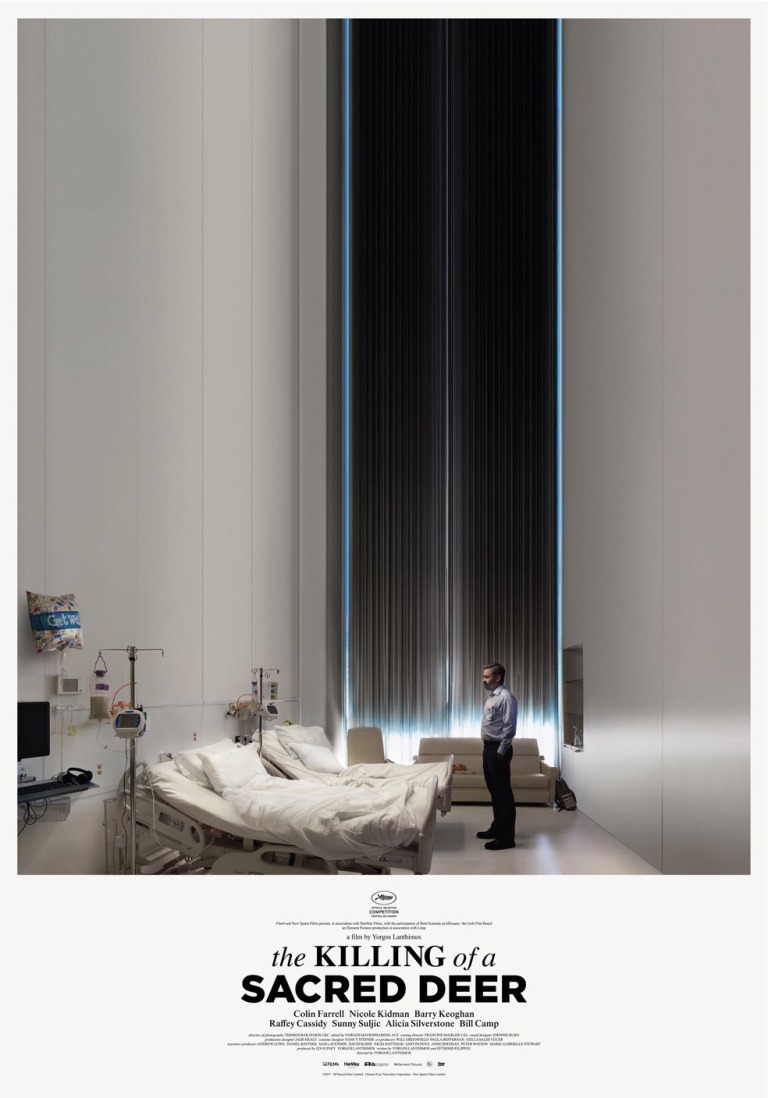 After last year’s weird, but hilarious comedy, The Lobster, Director Yorgos Lanthimos is back with a weird thriller/horror film, The Killing of a Sacred Deer. Does this film deliver or does it just confuse?

Beware of SPOILERS throughout.

Colin Farrell plays Steven, a successful cardiologist married to a beautiful woman, Anna (Nicole Kidman) with two lovely kids, Kim (Raffey Cassidy) and Bob (Sunny Suljic). Steven also has a strange friendship with a teenage boy, Martin (Barry Keoghan), who comes across as a little slow or “off.” Martin even comes to Steven’s house and meets his family, befriending Kim. Then one day, Bob loses the use of his legs. Martin demands to meet with Steven while Bob is having tests done at the hospital at which Steven works. At their meeting, Martin reveals that Bob will die and that Anna and Kim will suffer the same fate. The only way Steven can prevent this is by killing one of the three voluntarily. The reason why this is happening? Martin blames Steven for killing his father on the operating table. Steven dismisses Martin’s claims as the ramblings of a disturbed teen, but then Kim falls ill. Now Steven has a terrible choice to make or find a way to stop it happening altogether.

I’ll say this right off the bat, The Killing of a Sacred Deer will not be for everyone. It is a strange film, but as creepy as it gets, it is also darkly humorous, which I loved. The ending is also open to debate as the film never adequately explains what happened exactly. This will either intrigue audiences or infuriate them. I was intrigued, because it made me look at the film in a different way and I love when movies do that. The one thing I couldn’t completely reconcile, though, was the stilted dialogue. Everyone in this film spoke as if they were an alien, saying exactly what they were thinking at all times. It was the same with The Lobster, but that film takes place in a future dystopia, so it made a little more sense there.

The cast is fantastic. Farrell was great in The Lobster and he continues that winning streak with Lanthimos here. He handles both the drama and subtle comedy expertly. Kidman is also stellar in her role. She spars with and matches Farrell at every turn. Alicia Silverstone has a real nice cameo as Martin’s mother and Cassidy and Suljic are not typically annoying child actors. Bill Camp also puts in a nice performance as Farrell’s colleague. However, the real star here is Keoghan as Martin. The young actor also impressed in Christopher Nolan’s Dunkirk earlier this year, but Martin is a completely different role for him. He plays Martin as a complete enigma. Is he as slow as he appears or is he the sinister mastermind? He does an excellent job here and I wouldn’t be surprised if he sneaks into the Best Supporting Actor race for the Oscars.

Overall, I enjoyed The Killing of a Sacred Deer, but where The Lobster‘s strangeness was endearing, the strangeness in this film keeps the audience at arms’ length. So, your mileage will vary, but I liked it quite a bit.