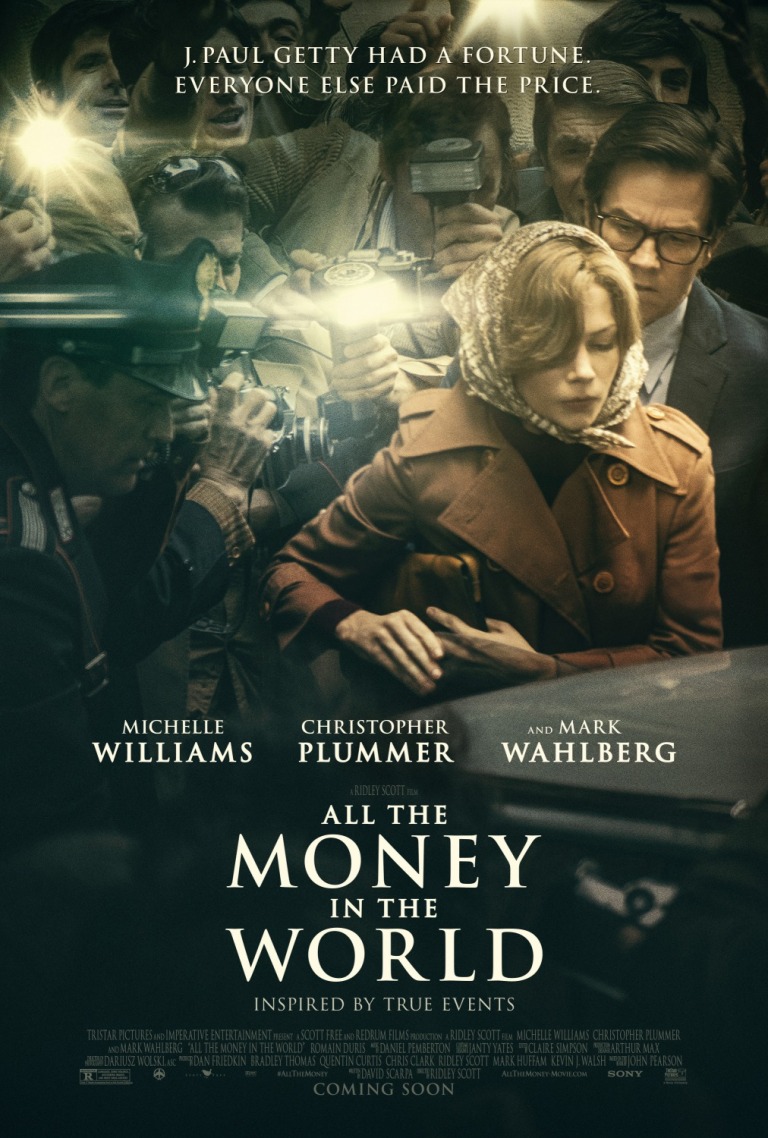 All the Money in the World is Director Ridley Scott’s second theatrical feature this year. Due to some emergency reshoots to excise Kevin Spacey from the film, the movie was only completed a few weeks ago. Did those last minute changes sink the film or save it?

Set in 1973 and inspired by a true story, All the Money in the World centers on the kidnapping of Paul Getty (Charlie Plummer), grandson to J. Paul Getty (Christopher Plummer—no relation), the man behind Getty Oil and, at the time, the richest man in the world. Italian kidnappers call Paul’s mother, Gail (Michelle Williams), who is divorced from her husband (Andrew Buchan), and by extension, the Getty Empire. Gail has no real money of her own, a fact the kidnappers ignore as they demand $17 million for Paul’s return. She goes to her ex-father-in-law for help and money to pay the ransom. He refuses and instead sends Fletcher Chase (Mark Wahlberg), an ex-CIA man who handles Getty’s security, to help get Paul back. What ensues is a tense back and forth as Gail and Fletcher try to negotiate with the kidnappers, while Getty repeatedly shows what a cheap son of a bitch he is. Will Fletcher and Gail get Paul back? Will Getty ever receive his comeuppance?

I’m happy to report that All the Money in the World is a far better film than Ridley Scott’s earlier entry this year, Alien: Covenant. The film is a taut drama with Getty’s absurd approach to money bordering on the unbelievable. It’s simply a well-made film with a great cast. I would have liked to have seen Wahlberg’s character be a bit more involved in the plot, and the kidnappers a bit more vicious—for much of the film’s first half, it feels like they’re daring the Getty family to call their bluff and when they did, there were no repercussions. However, if this is how it happened, this is how it happened. I’m sure if there were a way for Scott to make the film more exciting without blowing up the actual history, he would have found it.

Now, let’s talk about the controversy behind the film. Originally, Kevin Spacey was due to play Getty—underneath a ton of makeup, of course—but once allegations of his sexual impropriety surfaced, the decision was made to replace him. Ridley Scott cast Christopher Plummer—reportedly his first choice anyway—and shot the reshoots in only nine days mere weeks ago. It’s an immensely impressive feat and the switch is seamless. There was one scene where it looked like Plummer might have been inserted digitally, but otherwise, he’s there acting with Williams and Wahlberg with no hint of the behind the scenes drama, nor any sign that these scenes were reshot on the fly. Also, I’m of the belief that if you need an old man in your movie, you cast an old man as opposed to heaping makeup onto a younger man. And let’s not fool ourselves here—it’s not like Christopher Plummer is some kind of downgrade from Kevin Spacey. He’s no slouch.

The cast is really fantastic here. Plummer is positively despicable as J. Paul Getty and is probably headed for a Best Supporting Actor Oscar nomination for the stellar work he does here. He’s easily one of the best elements of this film and I think Scott ended up with the best actor for the role in the end. Plummer was definitely the best ethical choice, considering Spacey’s alleged transgressions, but I also feel that the heavy makeup that Spacey had to wear might have been distracting. Plummer just did a great job. However, in spite of the fantastic work of Plummer, the star of this film is Michelle Williams, arguably the greatest actor of her generation. She is just so good and she delivers another dynamite performance here. I find her to be positively mesmerizing. It all seems so effortless for her. With powerhouses like Williams and Plummer in the cast, it might not be so bad to come in third place, but that’s where Wahlberg sits. He does a good job here and has some nice scenes throughout the film. He is his typical Wahlberg self here—neither elevating the material, nor bringing it down. He has a solid team around him, so he does very well. I also really enjoyed Romain Duris, who plays Cinquanta, the main kidnapper, who comes to care about Paul’s wellbeing. Charlie Plummer also does fine work here conveying the fear that he has to live with when the kidnappers do finally start getting nasty.

Overall, All the Money in the World is a very solid film. It’s expertly made and has two of the better performances this year in Christopher Plummer and Michelle Williams. The film may drag a bit here and there, but I found it to be highly engaging and enjoyable. See it.