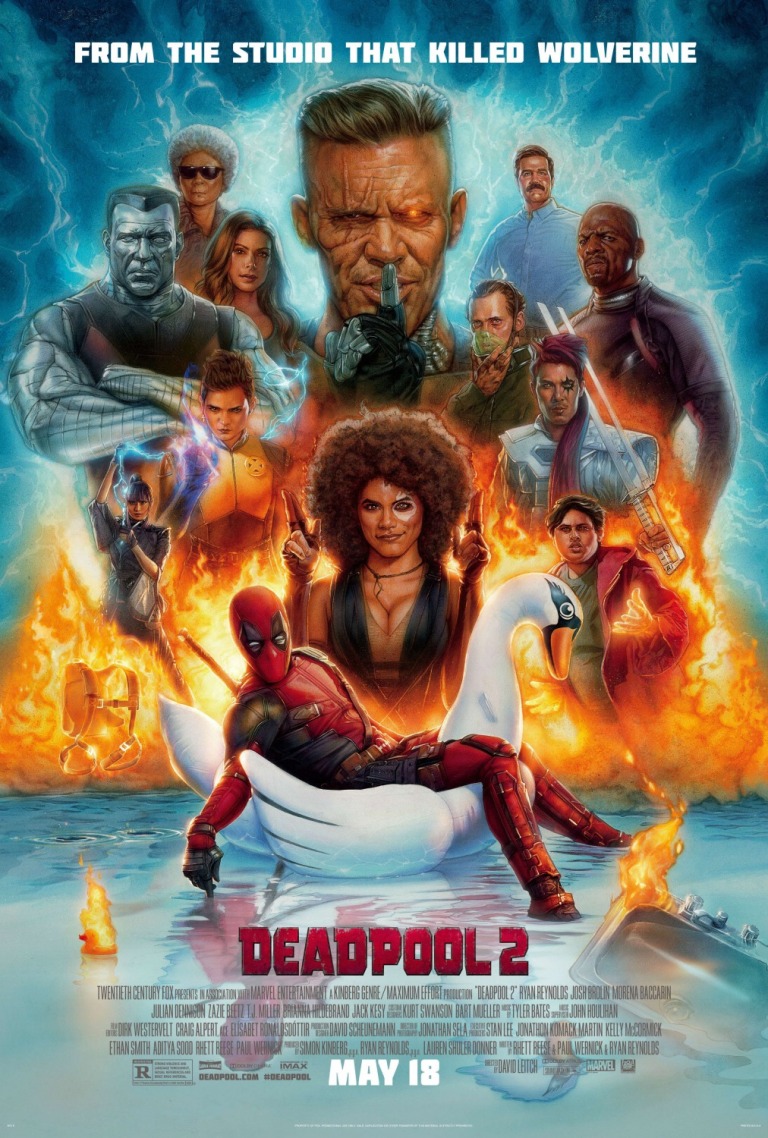 Two years ago, Deadpool burst onto the scene and showed that superhero films could be funny, raunchy, and irreverent. Now, Deadpool 2 has hit theaters. Is it more of the same or does it up the ante even more?

The basic plot, without giving anything major away, is that Deadpool (Ryan Reynolds) finds himself trying to protect a young, volatile mutant, Russell (Julian Dennison), from Cable (Josh Brolin), a time traveler that’s out to protect the future from what Russell becomes. In order to stop Cable, Deadpool has to form his own team, X-Force, to help out. Members include the unnaturally lucky Domino (Zazie Beetz), the powerful Bedlam (Terry Crews), swordsman Shatterstar (Lewis Tan), and Peter (Rob Delaney). Also, the X-Man Colossus (Stefan Kapicic) shows up again to help try and keep Deadpool on the straight and narrow. Will Deadpool stop Cable, or will the one-eyed death machine win out?

The one and probably only thing you need to know about Deadpool 2 is that it is 100% hilarious. You will laugh from start to finish, that much is guaranteed. Also, the action is topnotch. Despite Director Tim Miller no returning for the sequel—David Leitch handles directing duties this time around—the style is pretty much the same as the first film. The scope is bigger in this film, but that makes sense considering how successful the first film was. While the comedy and action were all on point, the story was just all right. I wasn’t completely sold on Deadpool’s reasons for wanting to help Russell. Deadpool doesn’t strike me as the family type, and it’s a box that it felt like he was being forced into. Silly Deadpool is great, but when Deadpool tries to get really serious, it never really feels right. It might have worked better if Cable had come back in time to kill Deadpool himself. Also, while I enjoyed Brolin’s portrayal of Cable, I wasn’t a fan of how he was written by screenwriters Rhett Reese, Paul Wernick, and Reynolds. Without getting too specific, Cable is out for revenge and though I’m sure there might be more to that story, this motivation felt a bit too petty for Cable. In the comics, Cable has a complex—and yes, convoluted—history, but simple revenge isn’t really his thing. So, Cable felt diminished as a character. It was disappointing.

One character that’s not disappointing in the least is Zazie Beetz’s Domino. She’s a ton of fun and a breath of fresh air, but to be honest, I kind of wish she’d been partnered with Cable like in the books. The X-Force team is great for several laughs. When they launch into battle, it is positively uproarious. There are also some fantastic cameos to look out for. The post-credits scene is also very funny, but it pretty much negates Deadpool’s entire arc in this film, which is crappy from a storytelling perspective.

Ryan Reynolds was born to play Deadpool and he once again delivers on all levels. He’s so quick and funny—a real joy to see in the part. Again, I liked Brolin and he did well with what the writers gave him, even if I’m a little disgruntled that he wasn’t fleshed out as much as he could have been. And please understand, I know they couldn’t have covered all of Cable’s backstory in this film, but just a little would have better than no real backstory at all. Beetz is delightful as Domino and Kapicic is great again as Colossus. I will say, though, that there was one decision that Colossus makes in the film that didn’t feel right for the character, but other than that, it’s so great to have a faithful adaptation of the big Russian, finally. The one piece that didn’t completely fit for me was Dennison as Russell. I loved him so much in Hunt for the Wilderpeople, but Russell is essentially the same character as Ricky in Wilderpeople, except he has super powers. So, it was disappointing to see a young actor that had so much promise suddenly appear so one note. Now, that may boil down to the direction he received, but I was hoping for a bit more.

Overall, I didn’t find Deadpool 2 to be superior to the original, but it’s still a damn funny movie. You’ll have a great time at this one and I highly recommend you see it.