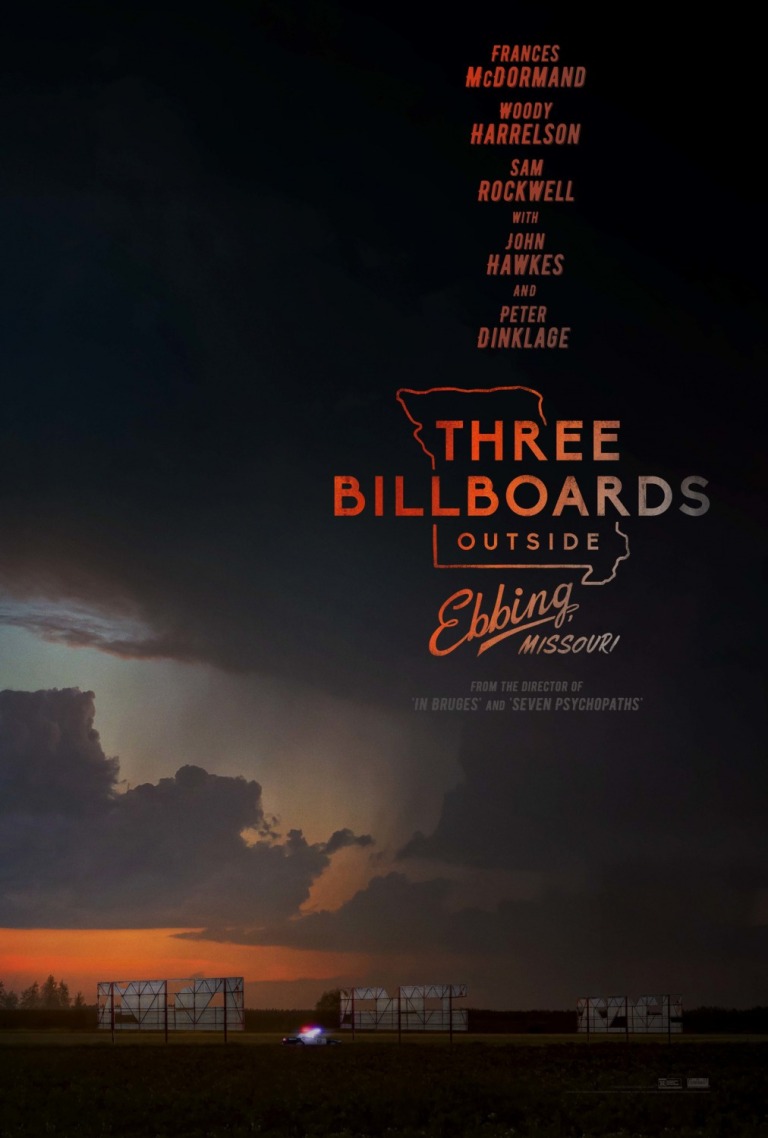 Writer-Director Martin McDonagh delivers his latest pitch-black comedy, Three Billboards Outside Ebbing, Missouri. Does it succeed as both a comedy and drama or does it fall flat somewhere in-between?

Mildred Hayes (Frances McDormand) is a divorcee and mother mourning the loss of her daughter, Angela (Kathryn Newton), who was raped and murdered seven months previously. Frustrated by the lack of progress on the investigation, Mildred rents three billboards on the road to her house calling out Police Chief Willoughby (Woody Harrelson) for his ineffectiveness. The billboards set off a debate in the small town of Ebbing as the townspeople take sides—mostly against Mildred. When tragedy strikes again, people begin to wonder if the billboards were to blame and a firestorm threatens to consume the town.

Like McDonagh’s previous films, In Bruges and Seven Psychopaths, Three Billboards has a lot of comedy, but it’s also very, very dark. This one may just be his darkest yet, not only because of the nature of Angela’s death, but also because Mildred borders on unlikable at various points throughout the movie. Mildred’s acerbic nature is what leads to much of the comedy in the film, but it is also what prevents the audience from completely embracing her. So, when you have a protagonist that you’re split on whether you like her or not, that’s going to affect your enjoyment of that film. Also, where Mildred ends up at the end of the film was a bridge too far for me. She does a lot of messed up things in this story, all in the name of going to war with what she perceives to be a lazy and corrupt police force, but the path she’s on by the end of the film was too extreme. Logically and narratively, I understand why she ends up there, but it still didn’t work for me. In addition to that, after a major plot twist in the middle of the film, a lot of the comedy felt like it was leeched out of the movie and the tone shifts considerably into dark drama. Dark dramas are great, but not when they start out as a kind of Coen Brothers-type dramedy. It was a shift in tone that makes sense considering the subject matter, but it wasn’t what I was expecting. Sometimes that works out and others it doesn’t.

The cast in this one is absolute dynamite and a large part of the film’s appeal. McDormand is more than likely headed for another Oscar nomination for her performance. You can never be sure what’s going to come out of Mildred’s mouth and McDormand infuses all her lines with so much venom, you can’t help but cringe. There’s a lot of sorrow in her performance as well, which humanizes her for the audience and McDormand plays it beautifully. Harrelson delivers his regular great performance as the weary police chief. The way the film is set up, you’d think Willoughby is a terrible cop, but he takes Mildred’s challenge to heart and recommits himself to trying to solve Angela’s case. His verbal sparring with McDormand is delightful. Sam Rockwell is incredible as Dixon, a hot-headed cop with a violent streak. He has an interesting arc in this film that I won’t spoil, but Willoughby challenges to him to be better and he tries to live up to those expectations. I also enjoyed Caleb Landry Jones as Red Welby, the young man who runs the billboard company. He has some nice scenes here. John Hawkes, Peter Dinklage, Lucas Hedges, and Abbie Cornish all deliver nice performance in their supporting roles, though I would have liked to have seen more of Dinklage’s character since I feel that Mildred’s dismissal of him could have been explored further considering the important role he plays later in the film.

Overall, I liked Three Billboards, but I really wanted to love it. Mildred is a complicated character and McDormand plays her brilliantly, but I just couldn’t completely embrace her and that, along with the tone shift about halfway through kind of took me out of this one. If you like dark films laced with comedy, see it, but don’t say I didn’t warn you.